Is it an advantage or a disadvantage to be playing a team that you know so well in the final?

I don’t think the players need to pay that much attention. It’s more relevant to the coach’s match preparations, thinking about what he’s going to do. He knows Arsenal, even though he’s only faced them twice this year. We know the Premier League. We know very well how they play, we know their system. It’s easy to prepare for the match. This season we’ve played them twice: we won one and lost one. Even if we’d lost those two matches 5-0, I think this final is 50-50. ​

What do you think the deciding factor will be?

A final ultimately comes down to the small margins. It’s all about not making any mistakes because in a final they always end up proving costly. It’s perhaps also down to the freshness. At the end of the season everyone is a bit tired and that’ll also be a factor and then there’s the mental side of things too. I think that whichever side is strongest mentally will end up winning the game. When the season begins at Chelsea, your target is to win something. You obviously want to win the greatest of the European competitions, which is the Champions League, but we weren’t involved in it this year, so we gave our all to win the Europa League. I don’t think that the season has been all that bad. We finished in the top three, reached the League Cup final and if we win the Europa League, it’ll have been a very good season. That said, we would have liked to have done better in the league and progressed further in the FA Cup, but it’s been a difficult season and finishing in the top three, a final and perhaps winning a trophy isn’t bad at all. ​

You’ve had to adapt to a new coach, new methods…

It’s a question of time. With a new coach and two or three new players it always takes a bit of time. That said, we made a good start but we then went through a bit of a tough patch but that’s all part and parcel of a season. You always have your ups and downs but we’re all happy with how the season has ended.

Can you talk to us a bit about Maurizio Sarri’s philosophy and what he’s brought to the club?

We’re all happy to have a coach who wants to play good football. At Chelsea, and with the greatest of respect to previous coaches, perhaps we were used to placing less importance on the style of play and the result was the most important thing. Under Sarri, it’s completely different. First and foremost, it’s about our play and what suits us best and so I’m happy with that. Even though things have been a bit tough at times, perhaps because of language issues – it’s not easy for him to explain things in English. But I think we’ve still played some good stuff, even though of course the supporters always expect you to score and we haven’t always been able to do that. I’m pleased with the football we’ve played. ​ ​

During this European campaign Sarri has rotated things a fair bit and has given the younger players some game time. Is that rotation important to keep everyone interested?

Yes, it’s important. We’re lucky enough to have a pretty big squad and so you take full advantage of that to field the younger players and those who get a bit less game time. That helps to keep the 25, 26 or 27 members of the squad focused, even though there are players who play a bit more regularly. Those players who haven’t played as much in the league got a fair bit of game time in the Europa League. The main thing to remember is that we’re Chelsea, we’re a big group and it’s not always the same 11, 12 or 13 players who have to play. Now at the end of the season this also means that we’re still pretty fresh, even though we're still a bit tired, because there are plenty of players who have been able to rest earlier on.

What was the penalty shoot-out like against Eintracht Frankfurt? What emotions were involved?

I always want to take the last one. Since a young age, at Lille, I’ve always taken the fifth penalty and rarely miss, so that’s why I always try to take the last one. We didn’t make a good start, Azpi [César Azpilicueta] missed his and they scored two, so things were a bit tense. The goalkeepers are there to save penalties and Kepa [Arrizabalaga] made a good job of it. We then scored our next one. Penalties are an emotional rollercoaster and when it’s over and you’ve won, you’re happy. ​ ​

Looking back a bit now, how is the Eden Hazard that signed here Chelsea in 2012 different from the Eden today?

There’s not that much difference at all. I’ve stayed the same, although my football has developed. I think that I’ve developed too. Before, I was a child who just loved to play football. Now, I’m someone who thinks more about the team, although I did that before too. I’ve had lots of experience and, although lots of things have changed, I’ve managed to stay the same. Ever since I started playing at Lille at the age of 16, right up to when I retire in a few years, I’ll always see things the same way: to always enjoy playing out on the pitch. That’s what I try to do every time.

"I THINK THAT WHICHEVER SIDE IS STRONGEST MENTALLY WILL END UP WINNING THE GAME."

Do you continue to enjoy it despite all the expectation and pressure?

Yes! It’s true that when you play for a big club, and when you talk about big clubs, you’re always thinking about winning trophies. I think that if I’d thought like that throughout my career, I maybe wouldn’t have that many. I don’t have lots, I have a few, but I might not have won them. I’ve always put the game first. I’ve always put going out to play and enjoying myself first. That’s why I’ve had the career I’ve had. That’s what’s enabled me to win the trophies I have. ​ ​

How would you describe the connection you see here at this club between the supporters and the team?

It’s special, really special. Spending seven years at a club is already special but seven years at a big club is even better. I’ve had a good relationship with the players, the staff, the coaches, the physios and the medical staff from the day I arrived. The supporters are always good. This year, we have something to play for again and I hope we can bring [the trophy] back home.

What does everything you’ve accomplished at this club so far mean to you?

My dream was to play in the Premier League for a while. I’ve accomplished that. I didn’t expect to win it because the Premier League is very difficult and especially because, when I arrived at Chelsea, [Didier] Drogba was leaving, John Terry was talking about it being the end, Ashley Cole was at the end, Petr Čech was coming towards the end of his time there. I thought I was in real trouble! But in the end, I was lucky. [Frank] Lampard and Terry were still playing at the highest level. Didier came back and we won our first trophy together. After that, Chelsea was a big club and had big players arriving. I think that year José Mourinho brought in [Cesc] Fàbregas and [Diego] Costa and [Thibault] Courtois came back, that allowed us to write another story. That generation of Terry and Lampard had their own story. We have our own story, too. I’m very happy with what I’ve achieved at Chelsea, as a team and individually.

You had to miss the Europa League final in 2013 because of injury. What was your experience of that final?

Well, we won. If I’m just thinking on a personal level I was disappointed because I always want to play, especially in finals and European finals. The most important thing was to win the match. We won and I was very happy for the team and for the club. When I think back to the match it wasn’t easy but we did well. In the end, the most important thing is to win. Coming to a new club and winning something in your first season is good.

No items found.
UEFA Europa League
Too close to call
Forward Eden Hazard is expecting the UEFA Europa League final to “come down to the finest of margins” as London rivals Chelsea and Arsenal prepare to meet in Baku​ 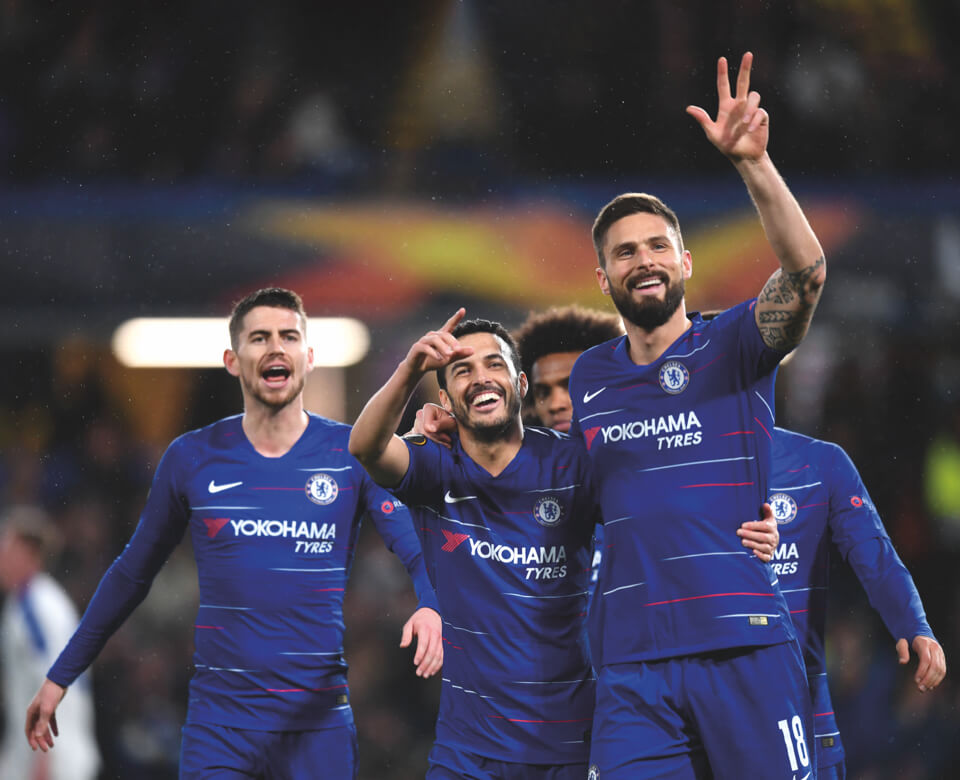