UEFA Champions League
I’ll die Bergamasco
Atalanta’s first foray into the Champions League is a source of pride for club legend and adopted son Glenn Strömberg, who wrote his name into Nerazzurri folklore during their European adventures in the 1980s

Picture an idyllic town in Lombardy and perhaps you imagine the mazy chaos of medieval streets on a hilltop. Majestic palazzos, churches and piazzas that never look quite as good in holiday snaps. A sandstone Venetian wall marking the old city limits, with a lush green curtain of mountains in the background. And a long-haired Swedish footballer roaming the streets, revered by locals like a Nordic god. ​

Well, maybe not the last part. But beyond the classic tropes of the travel brochures is a Lombardy full of surprises. A living, breathing Lombardy, a modern-day Lombardy crazy for calcio. And right at its centre, 50km northeast of Milan, resplendent at the foot of the Alps, is Bergamo. Welcome to the home of Atalanta. Welcome to the newest Italian town on the Champions League map. Welcome, in other words, to the fiefdom of Glenn Strömberg.

“I was born in Sweden, but I’ll die Bergamasco,” says the charismatic former club captain, a cult hero for Atalanta fans since his 1980s heyday. His striking blond locks are a lot shorter now and tinged with grey, but Strömberg still lives in Bergamo, the 59-year-old having forged a lifetime bond with the place and its people. And that, along with his current role as a television pundit, has given him a perfect vantage point to see a new set of idols emerge to compete for local affections.

These, after all, are exciting times for Atalanta. The Nerazzurri left Inter, AC Milan, Roma and Lazio in their wake last season to finish third in Serie A – their highest ever position securing a historic first ticket to the Champions League. The club named after a virgin huntress from Greek mythology will now start the group stage as competition virgins, but make no mistake: this is a team with a rich background of highs and lows, of proud European exploits and beloved crowd favourites. ​

Strömberg’s own route to legendary status was marked by hard work, loyalty and leadership. Rewind to 1984 and the Atalanta he joined were a vastly different team to today, the European Cup a distant, seemingly impossible fantasy. Newly promoted back to Serie A, just two years after a stint in Serie C, their primary goal was top-flight survival. In fact, the side founded in 1907 had fewer major trophies than their 24-year-old new signing, their 1962/63 Coppa Italia win the highlight of a yo-yo existence.

In contrast, Strömberg showed up in town with more than just a tall frame and the haircut of a lion, having been among the youngest members of the IFK Göteborg team that stunned Hamburg in the 1982 UEFA Cup final. Transformed from a gifted but tactically undisciplined tyro into a modern box-to-box midfielder by the Swedish upstarts’ coach Sven-Göran Eriksson, he followed his mentor to Benfica the next year, snaffling two Portuguese titles and reaching another UEFA Cup final.

That early grounding in silverware and success was not ideal preparation for Atalanta – at least, not 35 years ago. “The first few months were shocking for me,” Strömberg recalls, the days when Nerazzurri fans would grow their hair long in admiration still some way off. “I had to adapt to a different style of play, much more tactical and defensive. With Göteborg and Benfica, I played to win; with Atalanta, I played to avoid defeat.” ​

Still, he had known the less glamorous side of the game too, and the reality of life at a smaller club. Göteborg may have taken the continent by surprise, but it had pushed them to their limit, if not beyond. “It’s incredible we had such a successful season despite all our financial problems,” says Strömberg. “The club was almost broke, and the fans paid for the cost of our journey to Valencia in the quarter-finals.”

Three years into his time at Atalanta, Strömberg had a very different interaction with supporters – but it was that moment that secured his place in club lore.

Although his performances had improved, helping him win the Swedish player of the year award in 1985, the Nerazzurri could not save themselves from relegation  in 1986/87, and the mood among the fanbase darkened. ​

It was a turning point. Several big clubs hovered, eager for the Swede’s signature, but Strömberg opted to stay. “I felt my share of the responsibility, and I wanted to sort it out,” he recalls, having also clicked with Atalanta’s young new coach Emiliano Mondonico, a fellow rebel at heart with a shared passion for The Rolling Stones. Mondonico made Strömberg his captain, and the man with the armband showed his hunger with two goals in a pre-season friendly at the club’s Stadio Atleti Azzurri d’Italia. Not everyone was impressed, however. ​

“Wake up, Marisa!” came a cry from the stands. For Strömberg, this was too much. Fans of opposing teams had long called him Marisa, mocking his extravagant golden mane by giving him a female nickname, but he had never heard it from his own team’s supporters. His response was emphatic, a quick leap over the security fencing and a rush into the crowd bringing him face to face with his heckler. “My name is Glenn, Glenn Strömberg,” he bellowed. “Captain of Sweden and Atalanta. Don’t you ever forget it. You or anyone else.”

Nobody did. Especially as Atalanta would reach the semi-finals of the European Cup Winners’ Cup during that season in Serie B. They earned their tilt at Europe by finishing runners-up to Napoli in the 1987 Coppa Italia final – when Strömberg was one of only two non-Italians to feature, along with Diego Maradona. A club that had contested just one previous European tie saw off Merthyr Tydfil, Greek side OFI and Portuguese giants Sporting CP before tackling Mechelen in the last four.

“Our top and only priority was to get straight back into Serie A,” says Strömberg, a driving force as the second-tier hopefuls lit up the competition. “So we approached those European nights with no pressure at all. That was the secret of our incredible run. At that point, we were the only Italian club still in a European competition. It was so exciting. We became the second team for most Italian fans.” ​

Strömberg scored in the first leg of the semi-final as Atalanta went down 2-1 in Belgium, before they promptly took the lead in the return – only to succumb to another 2-1 loss. “After the first game, we felt sure we’d be able to overturn the deficit and get into the final. The memory of the match in Bergamo still hurts me. It could have been the perfect night; it became the worst disappointment of my career. We definitely deserved more.”

​The fairy tale was over. But the Nerazzurri did clinch their return to Serie A that season and Strömberg went on to experience two more European campaigns, both in the UEFA Cup, before retiring as a club icon in 1992. His popularity has only grown since, perhaps fuelled by Atalanta’s absence from continental competition until  Gian Piero Gasperini led the team to a UEFA Europa League berth in 2017. They are now poised for the next step into the elite, and Strömberg is as thrilled as any Atalantini. ​

“It’s Gasperini’s mentality that has really made the difference,” he explains. “He wants his team to play with no fear, always in the same attacking way, both at home and away, even against the strongest sides. Last season Atalanta played the best football in Italy, some of the best in Europe. Their philosophy is pretty clear: they want to win by playing good, aggressive, attacking football.”

“The Champions League is the real Europe – the highest quality of football, the best of the best. For Atalanta, this is the consecration of their growth. There’s nothing better, and this will bring not only money but also prestige, credibility. It’s a statement of the seriousness of Atalanta’s project.” ​

That project may involve loftier ambitions these days, but Strömberg still feels a deep attachment to a football team that embodies the spirit of the city. “There’s a famous old saying about Bergamo: ‘The character of a Bergamasco rarely shines like a flame, but under the ashes, the embers are always alive.’ That’s why I decided to live here, because it’s the same for me.

“For the final game of my career, the Atalanta supporters arranged a tifo, which gives me shivers even today. I needed time to settle here, but when you prove yourself as a committed player who gives everything on the pitch, they give you their unconditional love forever. I could have won more in my career elsewhere, but after 20 years I’m still called ‘Il capitano’ by Atalanta fans. Kids who never saw me play look at me as their hero. It’s a privilege, the biggest satisfaction.”

No items found.
UEFA Champions League
I’ll die Bergamasco
Atalanta’s first foray into the Champions League is a source of pride for club legend and adopted son Glenn Strömberg, who wrote his name into Nerazzurri folklore during their European adventures in the 1980s 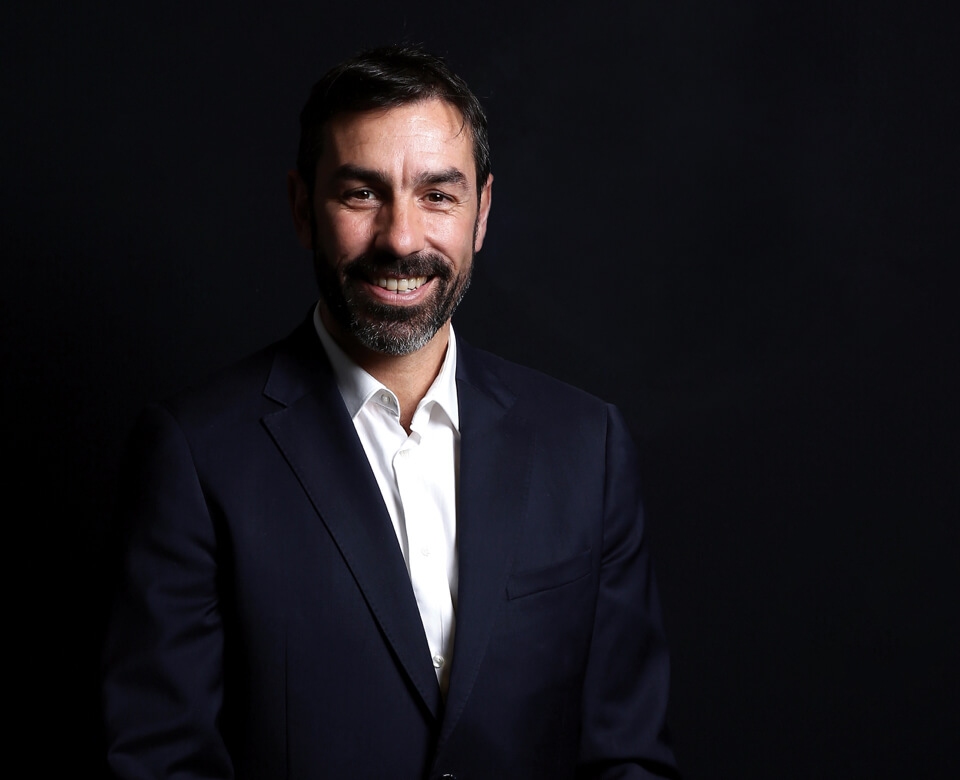