UEFA Super Cup
Taste of the unexpected
In 1998 a new chapter began in the history of the UEFA Super Cup, with the first one-off game at the start of a new season. We look back at the highlights of the 20 finals since then

This article was first published in the 2018 UEFA Super Cup final programme. Buy the programme here to read the original article.

Quiz question. When Real Madrid locked horns with Chelsea in the UEFA Super Cup on 28 August 1998, was it: a) the first time the Spanish giants had played in the competition; or b) the first UEFA Super Cup tie since the switch from two-legged contests to a single game?

If you answered “both”, then you already have some idea of how historic that Monaco meeting turned out to be. The competition had first been held under UEFA auspices in 1973, but this was a fresh beginning and a whole symbolic shift, with the new-look showpiece match moved from winter to summer to serve as a curtain-raiser for the European season.

Madrid and Chelsea thus set the tone for the coming campaign that August night 20 years ago, yet they also wrote the opening chapter of a truly modernised event. It was fitting, then, that both teams were as new to the competition as the revised format itself, each taking a step into the unknown beneath the iconic arches of the Stade Louis II.

No side has celebrated more UEFA Super Cup wins than Madrid’s four since 1998, but the Liga side were in for a shock during that trailblazing encounter. Chelsea, after all, had never appeared in the UEFA Champions League or European Champion Clubs’ Cup, yet they underlined their status as a rising force by clinching a 1-0 victory, Gus Poyet rifling in a late winner as a Chelsea defence marshalled by recent FIFA World Cup winners Marcel Desailly and Franck Leboeuf held firm.

The names are all strikingly familiar. But in some ways that pioneering UEFA Super Cup game still had one foot in a bygone time. For a start, new Chelsea coach Gianluca Vialli was actually a player-manager, juggling his chalkboard duties with matchday runs into the box. He did not feature in Monaco, but the revered Italian striker went on to make nine Premier League appearances that season – almost unthinkable at a major club today.

In addition, the Blues earned their trip to Monaco as one of the last teams to lift the UEFA Cup Winners’ Cup. That would happen just once more, with the competition’s final winners SS Lazio getting the better of Manchester United FC the following year, before the holders of the UEFA Cup – and now the UEFA Europa League – took over the mantle in 2000. The honour of being the first. fell to Galatasaray AŞ, and they too had a surprise in store for Madrid in Monaco. Having become the first Turkish club to win a major European trophy just three months earlier, Galatasaray added to their haul with the only golden-goal triumph in UEFA Super Cup history, Mário Jardel pouncing with a predatory finish in extra time to seal a 2-1 win.

It was a major upset, in a competition that has a habit of producing the unexpected. “We had an exceptional ambition to win this trophy, and we used this power to uncover the energy inside us,” said Galatasaray winger Okan Buruk, shedding light on the spirit that has helped several unfancied teams defy the odds. That same energy surely inspired FC Zenit to their 2-1 success against Manchester United in 2008, the St Petersburg outfit becoming the first Russian club on the roll of honour.

The UEFA Champions League holders have edged the last five editions, but the competition’s levelling effect has been felt in other ways. Above all, the game itself has become a movable feast, ending its 15-year residence in Monaco when Eden Arena in Prague hosted FC Bayern München’s victory on penalties against Chelsea in 2013 – goalkeeper Manuel Neuer deciding the only shoot-out in UEFA Super Cup history.

Since then, fans in some of Europe’s less traditional football strongholds have been able to watch the game’s stars up close, Tallinn now joining a list that includes Cardiff, Tbilisi, Trondheim and Skopje. The crowd figures alone show that the decision has proved an unqualified success, with the 51,940 spectators in Tbilisi who saw FC Barcelona win the 2015 edition a record turnout during the single-game era.

Nor have the host venues been the only unheralded names to leave their mark. The competition’s August date has made it the ideal occasion for clubs to field new signings and promising youngsters, and many have grasped their chance in style. None more so than Marco Asensio, who began his Madrid career by curling a superb long-range effort high into the net during the 3-2 victory against Sevilla FC in 2016 – a full week before his official unveiling as a first-team squad member.

John Arne Riise made a similar impact for new club Liverpool FC in their 3-2 defeat of Bayern in 2001, while Jardel’s Galatasaray double the previous year had also come on his first outing following a summer switch. Manchester United, meanwhile, were punished by a player who slipped through their grasp when they faced Lazio in 1999, Marcelo Salas scoring the only goal for the Italian side. “I’m happy that Salas was playing for us instead of Manchester United,” grinned Biancocelesti coach Sven-Göran Eriksson.

The UEFA Super Cup has also given new managers the opportunity to begin their reigns on a high, and there was added spice when Bayern saw off Chelsea in 2013 – with old rivals Josep Guardiola and José Mourinho manning the dugouts after shake-ups at both clubs. “It was important for Guardiola to win,” said Bayern winger Franck Ribéry, while Mourinho had to swallow another defeat after his FC Porto side had succumbed 1-0 to AC Milan in 2003. “They take the cup and the best team lost,” said the Portuguese, struggling to hide his displeasure.

For his part, Guardiola had already won the competition with Barcelona in 2009 and 2011, having also lifted the trophy as a player in 1992 – a feat matched by Carlo Ancelotti, Diego Simeone, Luis Enrique and most recently, Zinédine Zidane.

Enrique’s Barça team prevailed in perhaps the most remarkable UEFA Super Cup showdown of all, when they edged Sevilla 5-4 after extra time in 2015. Not only the highest-scoring edition in the modern era, that thrilling encounter also yielded the quickest goal since the competition was launched, Éver Banega finding the net inside three minutes for the Rojiblancos. Sevilla later clawed their way back from 4-1 down, but it was Pedro Rodríguez who had the final say as Barcelona secured their joint record fifth victory, pulling them level with Milan.

Two-goal Lionel Messi was the real star of the show that night, and another feature of the UEFA Super Cup is its habit of showcasing football’s greatest talents, who tend to be refreshed and raring to go after their summer holidays.

Cristiano Ronaldo had struck twice the previous year as Madrid dispatched Sevilla 2-0, but the greatest individual performance of the last two decades remains Radamel Falcao’s sumptuous hat-trick for Club Atlético de Madrid in their 4-1 win against Chelsea in 2012.

The Colombian striker’s lesson in centre-forward play left Diego Simeone “speechless”, and the Atleti coach now hopes to be dumbstruck again in another landmark UEFA Super Cup this year. The first to feature two teams from the same city, the 2018 edition is already
guaranteed to continue Spanish football’s recent dominance, ensuring a ninth victory for Spain in the last ten seasons – and a 12th overall since Madrid’s fateful maiden outing in Monaco. Take note, quiz fans.

No items found.
UEFA Super Cup
Taste of the unexpected
In 1998 a new chapter began in the history of the UEFA Super Cup, with the first one-off game at the start of a new season. We look back at the highlights of the 20 finals since then 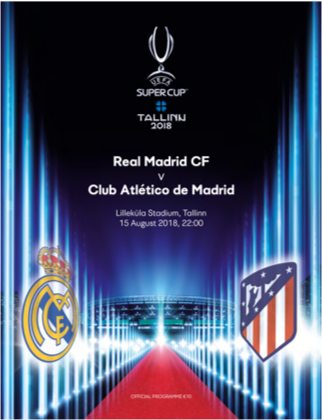