UEFA Champions League
Pass me the European Cup
Forty years after Brian Clough’s Nottingham Forest rose from nowhere to reach the pinnacle of the European game, Daniel Taylor looks back on their remarkable journey and the men who made it possible

Every week, regular as clockwork, a group of former footballers now in their 60s and 70s meet at a pub in Nottingham to catch up over a couple of drinks and reminisce about one of the greatest stories in the history of the European Cup. ​

These are the heroes of Nottingham Forest’s 1978/79 side and the nostalgia tends to come easily bearing in mind the almost implausible journey that turned an unfashionable, unheralded club into the kings of Europe, under the guidance of possibly the most charismatic manager there has ever been. ​

Forest were 13th in the old Division Two when Brian Clough’s Mercedes – part of the payoff from his infamous 44-day spell as manager of Leeds United – swung through the gates of the City Ground for the first time on 6 January 1975. “The least progressive club in the country” was how one of Forest’s own committee members had described them, while the former manager, Dave Mackay, had even attempted to dissuade Clough from taking the job. “You’ll never achieve anything there” were his exact words.

What happened next is nothing short of a football miracle, quite possibly the greatest story in the history of the European Cup, bearing in mind it was the 40th anniversary last Thursday of  the day John Robertson put over the cross for Trevor Francis to head in the goal that crowned Forest as European champions for the first time. ​

Robertson scored the winner himself in the final against Hamburg in Madrid the following year and, back in Nottingham, the legacy of those triumphs includes a stand named after Clough and another for his assistant, Peter Taylor, at the club’s 30,000-capacity stadium. A film, I Believe in Miracles, was released in 2015 and José Mourinho, a huge Clough fan, supplied the foreword when I wrote the accompanying book. ​

There is a statue of Clough in Nottingham city centre and the scale of his work is probably summed up by the fact that the modern Forest, now managed by one of their ‘Miracle Men’, Martin O’Neill, have recently passed a much less celebrated anniversary – 20 years outside England’s top division. For the club’s supporters, there is immense pride tinged with sadness, knowing they will never experience those kinds of joys again. ​

Mourinho was so in awe of Forest’s glory years that he told the story of how he came to Nottingham one day because he wanted to see for himself the place where Clough created all those golden memories. Mourinho was part of Barcelona’s backroom staff at the time and nothing like as recognisable as he is now. “I walked to Nottingham Castle and I saw the statue of Robin Hood. Then I walked to the stadium. And when I saw the stadium, I thought: ‘Are you kidding me – this club won the European Cup? Twice?’” ​

The story will never be repeated but, then again, it had never happened before either. Forest won promotion in 1977 with the fifth-lowest points total of any promoted team in history. They had lost to York City, Peterborough United and Bristol Rovers (twice) before Taylor joined Clough’s side. From then, everything suddenly clicked.

After that, Forest won the First Division title at the first attempt, followed by back-to-back European Cups, beating Barcelona in the European Super Cup, as well as reaching three domestic cup finals in as many years (winning two). Their 42 matches unbeaten in England’s top division set a record that would last a quarter of a century until Arsenal’s ‘Invincibles’ came along. ​

Yet it was a measure of Forest’s unorthodox success that when they drew the mighty Liverpool in the first round of the 1978/79 European Cup, a poll of the other First Division managers voted 17-3 in favour of the Anfield giants giving the ‘upstarts’ their comeuppance. Instead, Forest won 2-0 on a frenetic night at the City Ground and survived a ferocious onslaught on Merseyside to emerge with a goalless draw that put them through at the expense of a team that were trying to win a hat-trick of European titles.

​AEK Athens were eliminated in the next round, 7-2 on aggregate, before Grasshoppers of Zurich felt the force of Clough’s team in the quarter-finals, losing 5-2 over two legs. That set up a semi-final against Köln and an epic night at the City Ground, the German side taking an early 2-0 lead only for Forest to score three times on a mudbath of a pitch. Robertson scored the third with a diving header just a few days after his brother, Hughie, had been killed in a car crash. But there was still time for one final twist when a rare mistake from goalkeeper Peter Shilton allowed the substitute Yasuhiko Okudera to score a late equaliser and prompt the memorable headline ‘Forest Sunk by Japanese Sub’. ​

Forest needed something special in the return leg, but Clough never lacked confidence – “I do hope nobody is stupid enough to write us off,” he said, staring straight into the television camera for added effect. Ian Bowyer’s headed goal was enough to demonstrate why the manager had been even more bullish than usual. ​

All of which led Forest to a final against Malmö in Munich’s Olympiastadion and a sweet-scented night when Francis – the first £1m footballer in history – justified every penny with the far-post header that finished with him landing on the shot-putters’ circle behind the goal.

The final wasn’t a classic, and the players remember the celebrations being slightly muted because they knew they could have played better. But what a story. For many years, Clough had a framed picture of that goal in his office. “When I sit in my garden and close my eyes, I still see that goal in Munich,” he wrote in his autobiography. “One-nil, pass me the European Cup. Thank you very much.”

​Forty years since the defeat of Malmö, the camaraderie of that team is summed up by the way the Nottingham-based players still arrange their regular Thursday meet-ups. There is also a feeling, however, that they never truly received the recognition they deserved. Robertson, for example, still remembers the way the team were portrayed as a “rag-tag and bobtail outfit”. Nor have the players forgotten how the BBC pundit Bob Wilson predicted their “bubble will burst” – and how Clough used it as motivation. ​

“It’s never going to be beaten,” Robertson recalled last month. “If you think starting in May 1977 we were in the second division and by May 1979 we’re the European champions. I remember Bob Paisley saying that he thought we could win it and I couldn’t believe that because the European Cup, for me, was about Puskás and Di Stéfano.” ​

The legacy, 40 years later, is that Nottingham has won the European Cup more times than London, Paris, Berlin, Moscow and Rome combined. They reckon there were over 200,000 people in Nottingham city centre for the homecoming (even though Clough, being Clough, had gone on holiday to Crete rather than join everybody else). A banner – ‘Clough’s Bionic Bubble will Never Burst’ – was strategically attached to the Council House for their reception. “All of a sudden, Nottingham didn’t just have Robin Hood,” says John McGovern, captain of the 1979 side. “We had Robin Hood, Brian Clough and Nottingham Forest. We were like one of those comets you see flying across the night sky. We burned brightly, but it was all too brief. But, boy, did we burn brightly for a while.” ​ 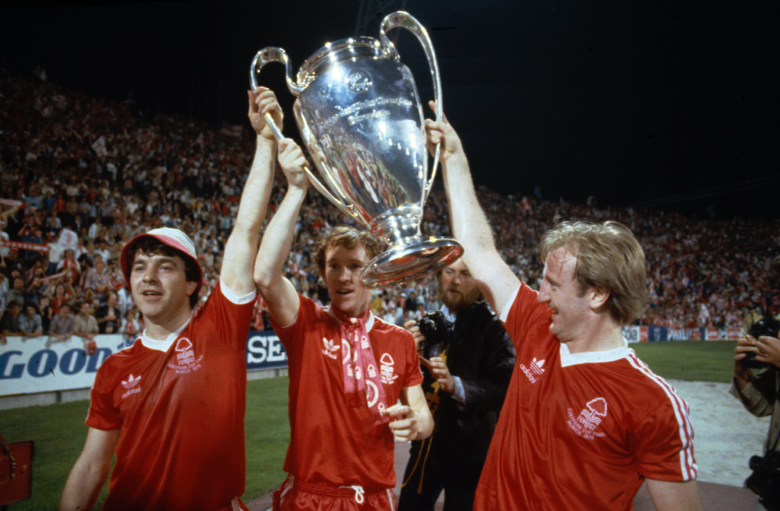 No items found.
UEFA Champions League
Pass me the European Cup
Forty years after Brian Clough’s Nottingham Forest rose from nowhere to reach the pinnacle of the European game, Daniel Taylor looks back on their remarkable journey and the men who made it possible