UEFA Champions League
Marcel desailly: I was on top of the world
A back-to-back Champions League winner with Marseille then AC Milan, Marcel Desailly talks fans, glory and getting his hands on club football’s biggest prize

This article is from the latest issue of Champions Journal which is available to purchase now.

If there was a hall of fame for football trivia, Marcel Desailly would be inducted in a heartbeat: he was, after all, the first player to win consecutive Champions League titles with two different clubs. That fact alone is impressive enough, but the details take it up a notch. He won his first one with Olympique de Marseille in 1993 as a 24-year-old. The French side were the underdogs against the might of AC Milan but emerged victorious thanks to a 43rd-minute winner from Desailly’s fellow centre-back, Basile Boli. That was Desailly’s sole season with Marseille – his next port of call was the club that he’d just helped to beat. He must have been able to give his new team-mates a few tips on how to get over the line: the 1994 final saw Milan thrash Barcelona 4-0. He’d only had a season to adapt to a new country, a new formation and a new position (defensive midfielder) but played the entire game and even completed the rout with an arcing effort in the second half. We asked the now 52-year-old to look back at a bountiful period of his decorated career, starting with his time in the south of France.

You have something in common with the city of Marseille: you’re both passionate about football.

Yes, Marseille is special. It’s a little Naples. You feel it every day; there is no getting away from it. At Milan I could, even if it was difficult. In London I could disappear and live my life without football coming into it. In Marseille, everywhere you go – the butcher’s, the baker’s, the petrol station, the newsagent’s – you have real stress. They live the whole season as if the next game were a derby.

When Basile Boli scored in the 1993 final, what was is it like to experience that as a player on the pitch?

This is the first time I’ve said this but I had a little moment, a tenth of a second, where I said to myself, “Is it really true?” My eyes saw Basile score but the fact that it was against Milan meant it took a little longer for it to register in my brain and turn into joy. It was a case of: “We’ve done it! We’ve scored!” It took time for it to sink in, then the happiness came because we hadn’t imagined it. And we knew that our principal quality was the fact that we were united and there was such solidarity. So if we scored one – a bit like the France team of 1998 – it was going to be difficult to score twice against us.

Next you took the trophy back to Marseille.

From the airport to the Stade Vélodrome, the whole way, the whole of Marseille had come out to greet the bus. And when we arrived at the Vélodrome, with the party, the happiness, the trophy… it was a special moment.

That summer you moved to Milan and within weeks you were walking into the Rossoneri dressing room to meet the players you’d just beaten in the Champions League final. That must have been a strange feeling.

It was. But it was also a magical moment because I said to myself, “Here we go on a new adventure.” Marseille was fabulous and I had expected to play my whole career there. I'd already had to argue with my family because they all wanted me to sign for Monaco, for the stability. I wanted the adrenalin of Marseille; I did the right thing. I thought I would stay at Marseille for seven, eight, ten seasons. So it was strange to arrive at Milan as a Champions League winner and a young first-team player. Plus, I was coming into the Fabio Capello philosophy of 4-4-2. I had to adapt to that.

Did you settle in quickly?

It was magical and I was fortunate that everything went for me. With the tactical set-up that was in place I was ideal for the role: big, solid and decent on the ball, with a tactical intelligence that came from my time at Nantes. All of those things meant I adapted to it; I fit into the plans already in place. I spoke to Capello about it 20 years later and said, “Fabio, when I arrived, you didn’t even know my name did you?” He said, “No, Marcel, I didn't know much about you.” But he said that one thing jumped out at him immediately: that he had no other choice than to play me. He told me he saw me in training and thought I was perfect for his system: pressing opponents over the 90 minutes with Franco Baresi behind me. It just worked. Yet I was not destined to be at Milan. It was a Jean-Pierre Papin, a Ballon d’Or winner, who went to play at Milan in those days; big stars, not a young player like me, a defender. I should never have been there!

Before the 1994 final there was a lot of talk about Johan Cruyff's ‘Dream Team’; you and your team-mates turned it into a nightmare for them. Were you as confident as you appeared on the pitch in the build-up to the game?

During the season we didn't concede a lot of goals or lose many games. We were confident in our tactical system; we knew how to defend, for sure, but we could also make the difference at the opposite end. Baresi was suspended but we were calm. And we were annoyed: Capello brought in the Spanish newspapers and they were making fun of AC Milan. “A technical level below and inferior individually – Barça are clearly better.” He put all of that in our faces. “Here you are, boys, this is what they’re saying about you. It’s up to you to reply now.” It was a very short meeting. He knew exactly how to motivate us.

Can you compare the two final victories?

It’s like choosing between my children. Each win has a sweetness. At Marseille I was a youngster, it was the first – it was huge. At Milan I was man of the match, I was on top of the world of football. It was an achievement. There’s adrenalin in that and there’s ego in that, just as much as in the idea of winning it for the first time. So I love them both just as much, with different feelings and emotions.

You scored in the 1994 final. Your celebration was a bit like Marco Tardelli’s in the 1982 World Cup final…

Someone sent me a photo where I was crossing myself, which is something I don’t normally do. I was so intense, it was so incredible. I was the barrier in midfield but for once I had the opportunity to go forward in the game – and I made the difference. There was a bit of stress that, even at 3-0, Barça could come back. I didn't score a lot of goals but there was no way back after that fourth one. Everyone will always talk about it. “Who scored? Desailly? That’s impossible!”

Power to the people

It’s not every day you entertain the European Cup in your lounge. And yet, thanks to the UEFA Champions League Trophy Tour driven by Nissan LEAF, five sets of fans got to share a sofa with the big-eared beauty. Usually Nissan stops off at grounds across the continent as part of its tour, so that fans can get up close and personal with the cup – as well as one of their club’s former legends who lifted it. With Covid-19 having derailed that plan, a few lucky LEAF owners had the cup brought to them and they enjoyed a digital link-up with a player instead. In the case of some delighted AC Milan supporters, it was Marcel Desailly’s face on their laptop.
“It was enthralling!” Desailly says. “We watched the 1994 Champions League final. I don't usually watch my old games but great Champions League moments are worth it, because there is always a special tingly feeling. We play football to give pleasure to the fans in the stadium, who get you caught up in their passion. Then you see the fans in their armchairs, watching a Champions League final, and they’re going crazy too. There were children with them and you could feel the energy. It was a real moment of togetherness around football.”

And could Desailly imagine playing a Champions League final without supporters in the stadium? “No, but we all find the energy – us on our sofas and the players on the pitch – to enjoy it as much as possible. Ask any player and they’ll tell you they dream of winning that trophy. When you go all the way, it’s such a feat of teamwork. It’s something extra. That’s why we love the Champions League.”

This article is one in a series of five interviews conducted by Champions Journal with former winners Ashley Cole, Cafu, Éric Abidal, Christian Karembeu and Marcel Desailly on the UEFA Champions League Trophy Tour driven by Nissan LEAF

No items found.
UEFA Champions League
Marcel desailly: I was on top of the world
A back-to-back Champions League winner with Marseille then AC Milan, Marcel Desailly talks fans, glory and getting his hands on club football’s biggest prize 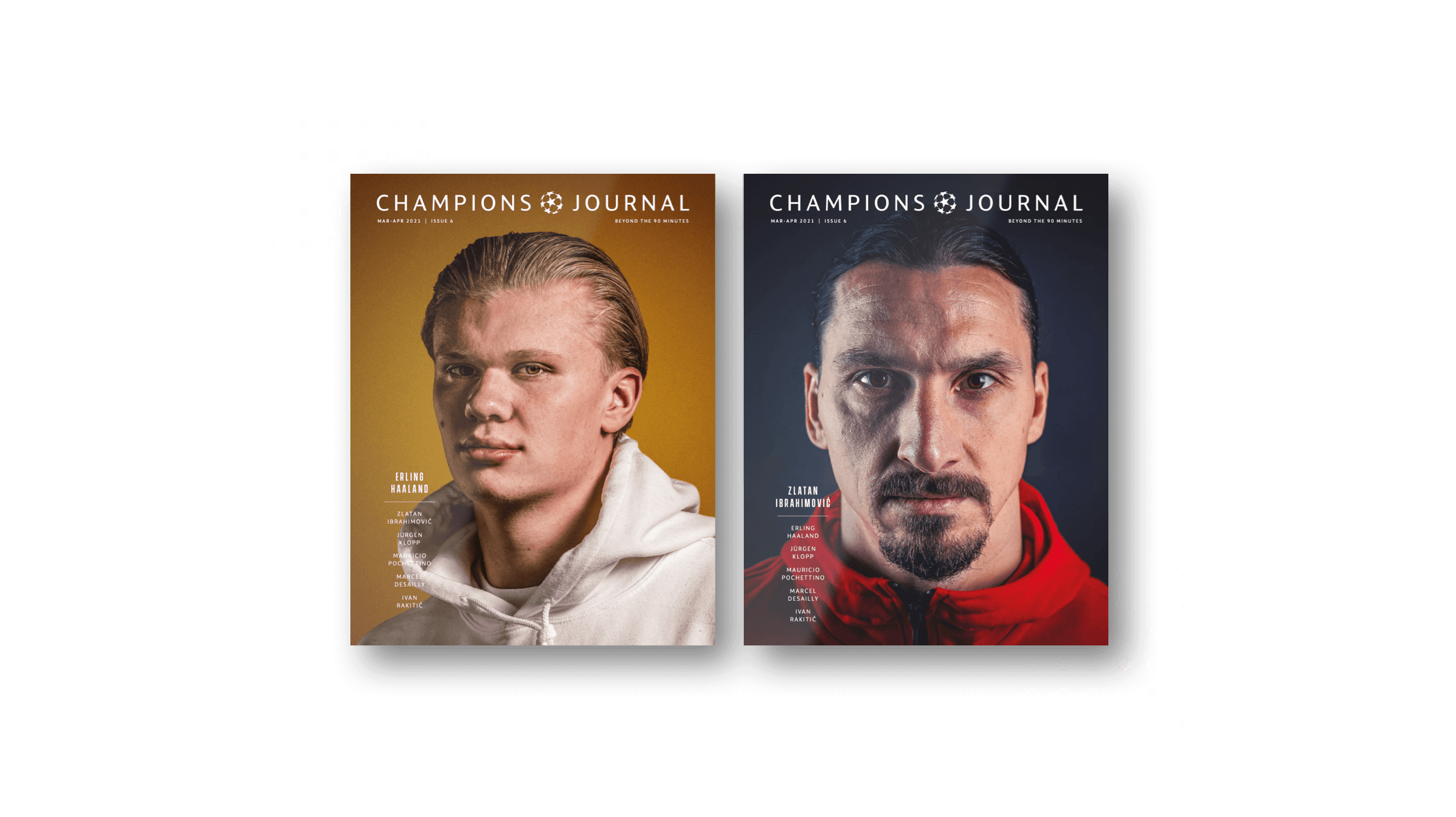 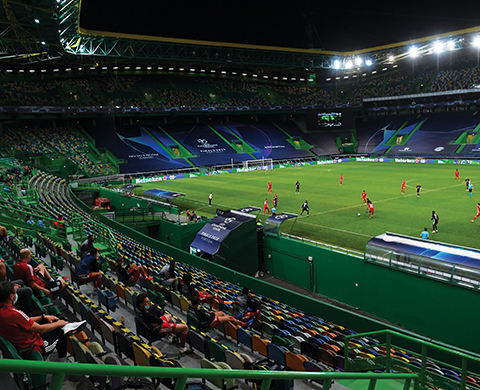 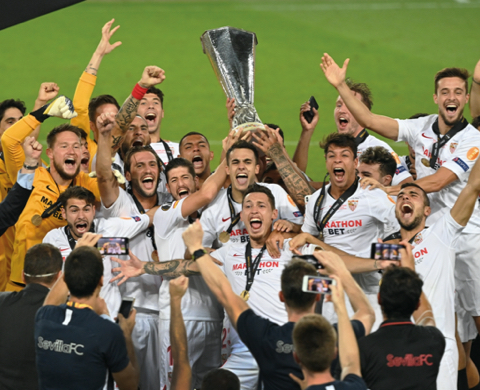